Last time I wrote to you I had 15 regular pupils at school and we were just about to shift to the new school building. I am amazed to realise over a month has gone by since I last wrote and also surprised that it really is a month since I last wrote.

Unfortunately 3 of my pupils have decided they don’t need to come to school in the last month. Blessing, Sunday and Donald live with their mum in a desperate situation. It is sad to realise that it is probably more to do with the mum than the children themselves that they have stopped coming to school but the mother was looking for money and didn’t like it when we told her to come to the house to eat rather than give her money to buy food that would likely be spent on alcohol.

However, I have had to make the decision that if they do come back they will not be able to join the class again, this is because currently I have 33 pupils coming regularly and about 13 on a waiting list! Just after I updated my blog last time I had 5 girls from a neighbouring house come and ask if they could come to school. We felt it was unwise to just bring them in so I told them they had to come back the following Tuesday, with the person they lived with, to talk to myself and Auntie Yvonne (Auntie Yvonne to translate between me and the parents). I told them to come at 8am but was expecting them to keep Zambian time and arrive sometime between 8.30 and 9, however when I went across to the school at 8am there were a crowd of parents and children, a few more than the 2 parents and 5 children I had told to come but not a total surprise. Seeing them all standing there I made a hasty retreat back to the house and grabbed Auntie Yvonne to come with me! We were able to talk to most parents that day and explained what they would be doing at school. Any children between the ages of 3 and 10 and below grade 2 were able to enrol. This bought the numbers up to 33 children, 5 of which can speak some English (3 are able to translate if there is a problem) and 2 more who understand most things… so 26 who have no English, most of which have never been to school and have been struggling with the concept of sitting on the floor and actually looking at the teacher instead of the back wall or laying down and gazing at the ceiling.

All of these changes are very exciting but also very daunting. We are preparing to talk to the ministry of education to see if we need to register as a community school. I feel slightly apprehensive about this - I never set out to be a ’head teacher’ in a school and certainly do not feel like I am experienced enough to do it - but we feel we must let them at least be aware of what is happening here to try and stop any problems we might have later on. It has also made it very clear to us the number of children who were not going to school for various reasons in our local area. It highlights the need, for many children, of a completely free education (No costs of uniforms, books, pencils etc) as we did not go out and advertise the school yet almost every day someone else comes begging for a place at school for their child and I have to turn them away.

In the last update I told you about the new school building. We moved in a few weeks ago and due to the number of children have already had to expand into the third room. It is not finished yet - I still need more shelves and the third room needs to be painted, but we are making it work. In the school we only have one table and a few chairs but we are managing with big pieces of cloth on the floor and a couple of smaller door mats to sit on.

Last week in school I was able to give every child 2 or 3 pieces of clothing. They all went away very, very happy and the next day most of them turned up wearing at least one of the things they had been given. It is nice to be able to give them these treats so that you to the people who donated the clothes.

The children who have just started coming in - Thank God for bringing them in and pray that they would continue to come. That they would be enthusiastic to come and learn.


That I would have patience, especially with the difficulties that come from the lack of understanding each others languages

For Blessing, Sunday and Donald who have stopped coming to school, that they would find some other way of getting to school and that their mother would realise she is damaging the children with her constant drinking.

For wisdom in talking to the Ministry of Education.

For all of the things in the new school that need to be sorted out ranging from finding tables and chairs to sorting out paperwork. (I feel that I need to start keeping some now there are so many children!)

For wisdom knowing how to teach the vast range of abilities and ages effectively. 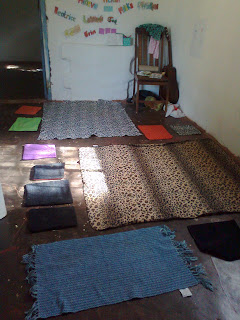 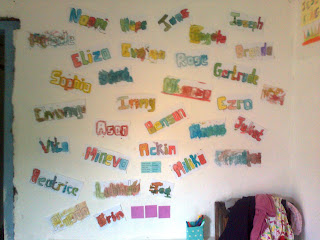 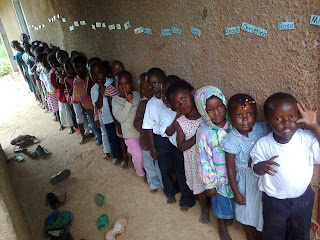 Getting ready to go into school 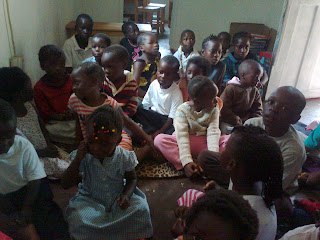 Posted by Abigail Brown at 11:41 No comments: