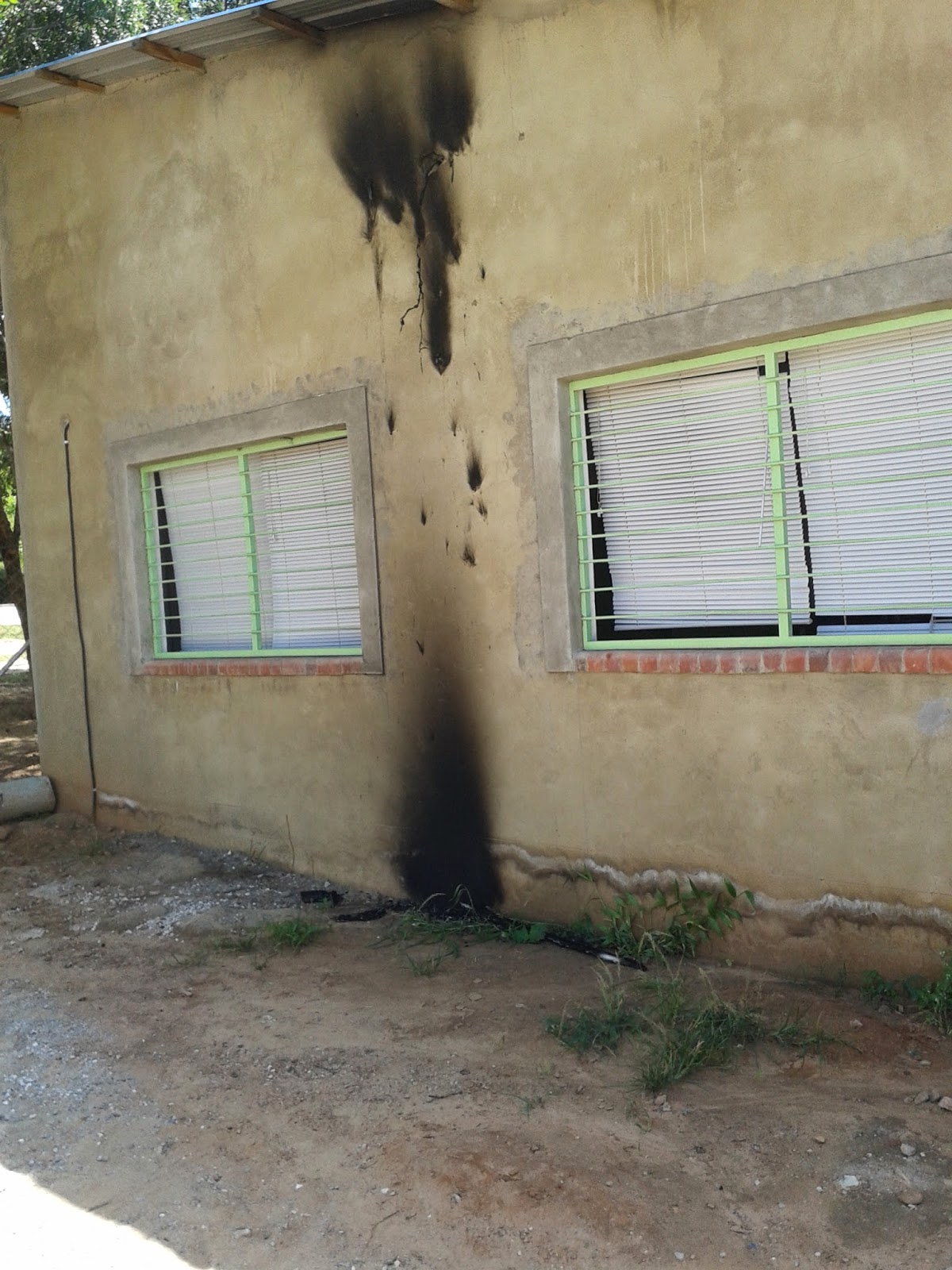 Yesterday when I got home from church I was asked what the black stuff down the side of school was.
"I don't know...paint?"

Well, I went to investigate the mysterious black stuff....

At some point in the night the electrics had decided to overheat and catch fire. There used to be a security light near the roof. The whole thing has burnt and fallen without our night security guard noticing. I wonder what he was doing - couldn't possibly have been sleeping on the job, surely!

The bulb, despite falling to the floor, is still in tact.  It could have been due to fluctuations in power supply, faulty fixings or a faulty wiring job. Those of you that have seen some of the electrics here will be surprised these things don't happen more often.

We are very glad that the wooden beams didn't catch light and nothing major was damaged. If it had been a light round the corner of the building they are attached to the wood. Then the whole roof could have gone up.

I think I will leave the black stain... it might remind some people to turn off the lights and plugs when they lock up in the afternoon.

Posted by Abigail Brown at 06:39 No comments:

In the last month things have been a bit dramatic around here!

In the last 10 weeks we have pulled together and staged a big fundraising concert in aid of Lusaka Childrens Charities.  This includes both of our 'projects', the boys and the school. Kasisi Children's home, Zoe's Hope, a premature baby home. Little Asissi, a special needs home and a few other places. We bought out 22 students from the royal conservatoire of Scotland to perform songs and dance from different shows and musicals.


On the Friday afternoon there was an 'open' dress rehearsal. Almost 400 children from the 7 charities we were supporting and other orphanages that had been invited filled the seats unsure of what to expect but very excited at the prospect of an 'outing'.

Two hours later they emerged having sung and danced their way through the show, cheering for every number, to receive a goody bag from the cast and head home with drinks, fruit, pens, a note book, sweets etc. I rode home with our children on the back of a lorry, they talked non-stop then started singing that they were not getting off the lorry and wanted to go back.  (Notice my black outfit?... I was in the pit orchestra which was lots of fun!)
Following the children's afternoon we put on two more shows. Friday evening for adults and Saturday Matinee for families. Both performances were very well received. Saturday was a sell out.  Now it is one week later, the performers have gone home, the house seems very quiet and the only complaints I have had is that there were not enough shows and it was in school holiday time so some people were away and missed it.

We are so pleased with how this all went and FNBank (our biggest sponsor) want to make it a an annual event. With a bit more time to organise we want to make it even bigger and better...

Other things have also been carrying on. We finished Term 1 just before the fundraiser.  It was a busy, yet good end to term. A few children have stopped in the course of the term.  Some parents struggle to pay the small amount each month and instead of coming and asking for work on the farm - which is offered to the parents - they just keep the children at home. For some children the novelty of school wore off. These children don't have anyone at home telling them they must come every day. However there are always children to take their place. The newest addition, Oscar, has recently moved from the village. It has took him a good 2 weeks to come near me and he is still very wary of his strange white teacher!  We also had a lot of sickness at the end of term. Every morning there was a line of 40+ children for cough mixture and children were given extra Moringa tea at break time. Moringa tea is made from dried leaves of Moringa trees and is full of goodness. (You can find out more here)


I have another two weeks of school holiday. Last week I was in school with teachers doing some training and planning. For the next 2 weeks I only have 2 jobs to finish and a board meeting to prepare for then school will be locked and the keys hidden for a while.

We thought the rains had stopped early this year. For almost two weeks no rain came, then it started again - every.single.day! This is one of the worst case scenarios for farmers. (so i'm told) The maize would have started to wilt with no rain. The rains starting again will lead to cobs rotting on the plant and not being harvestable. So now we are hoping for rains to finish quickly before everything is damaged.

Please Pray:
- Health of the children over the holiday.
- Thanks for the successful fundraiser.
- Rains... to have been enough and stop before the crops are spoilt.
- Me to finish school work and get a proper break.

Posted by Abigail Brown at 11:49 No comments: 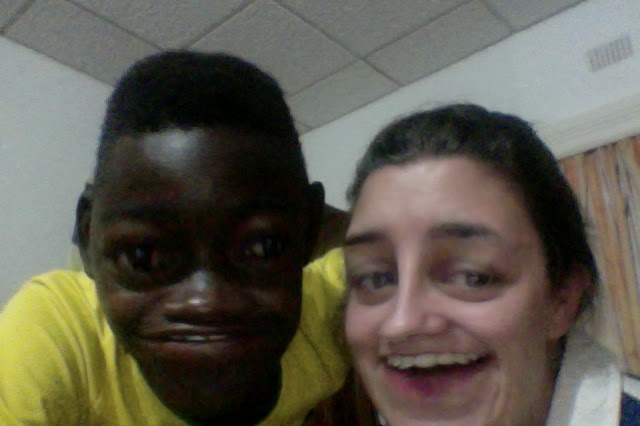 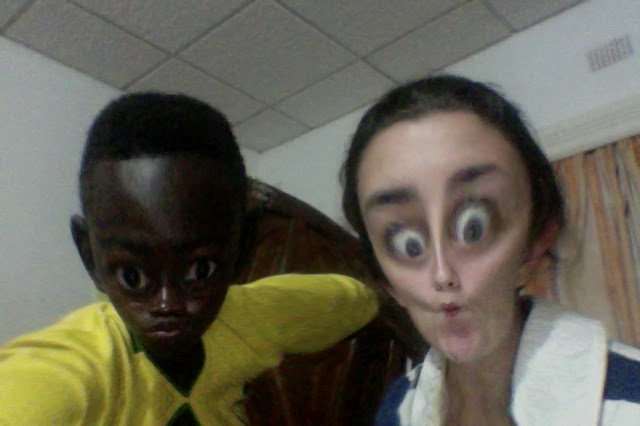 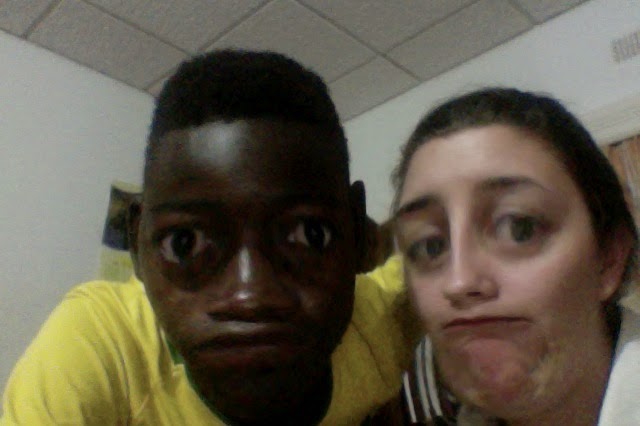 Posted by Abigail Brown at 22:06 No comments: