The children taught me a lesson....

Posted by Abigail Brown at 19:04 No comments:

I have started a series of 20 questions with the people at school so you can get to know some of them a bit more.

The children have no idea what the questions are before I ask them so this is a good way to get to know them a bit better.

I will be trying to upload a new video once a week.

Posted by Abigail Brown at 21:19 No comments:

I have started a series of 20 questions with the people at school so you can get to know some of them a bit more.

They have no idea what the questions are before I ask them so this is a good way to get to know the people here a bit better.

I will be trying to upload a new video once a week.

Posted by Abigail Brown at 21:07 No comments:

This week we had 2 holidays. Heroes day, a day to remember those who fought in the battles for independence (Independence day is a separate holiday!) and Unity day, a day which celebrates the great diversity in Zambia coming together as one country.

Zambia is a country that has 72 tribal languages, 10 provinces (counties), 5 major cities and a population of just over 17.5 million.

TCS is a small school, with a population of 150 children and 12 adults but within our school we have at least 5 languages and people whose backgrounds spread across all 10 provinces of Zambia, and Suffolk, England! Lusaka is a melting pot of traditions, cultures and languages and as a result town Nyanja has become the dominant language in this area. This is a hybrid of at least 3 languages and often results in me getting very frustrated as everyone I ask seems to translate a phrase slightly differently!

However, we the children are thriving. We have the usual issues with behaviour and attendance that any school has but we also have a brilliant literacy rate with children learning to read very quickly and not only that, they can understand it as well!

Posted by Abigail Brown at 18:45 No comments:

Three years ago our ZEMS charity sent out 4 big boxes of books to start the TCS Library. Since then we have added books from all over the world, Zambia, South Africa, Australia, America and even more from the UK. 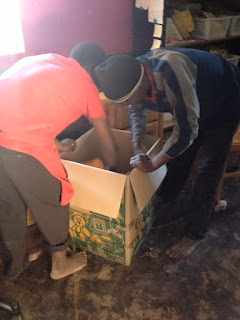 Our Library has been functional but very plain. It started off in one of the old, dark classrooms then we moved it into a converted container. The books have all been very well used and were in need of repairs and a good sort out and the whole thing needed a serious facelift.

Then along came Debs. She arrived for a 6 week visit mid March and was happy to get stuck in wherever it was needed so between helping out in the classrooms and listening to readers we tackled the Library.

See the transformation in the video below.

Posted by Abigail Brown at 11:55 No comments: 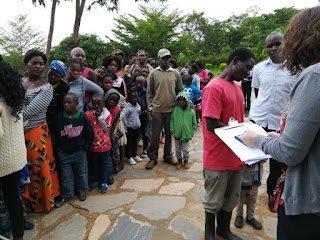 Posted by Abigail Brown at 07:44 No comments: